Our Value is Built to Last 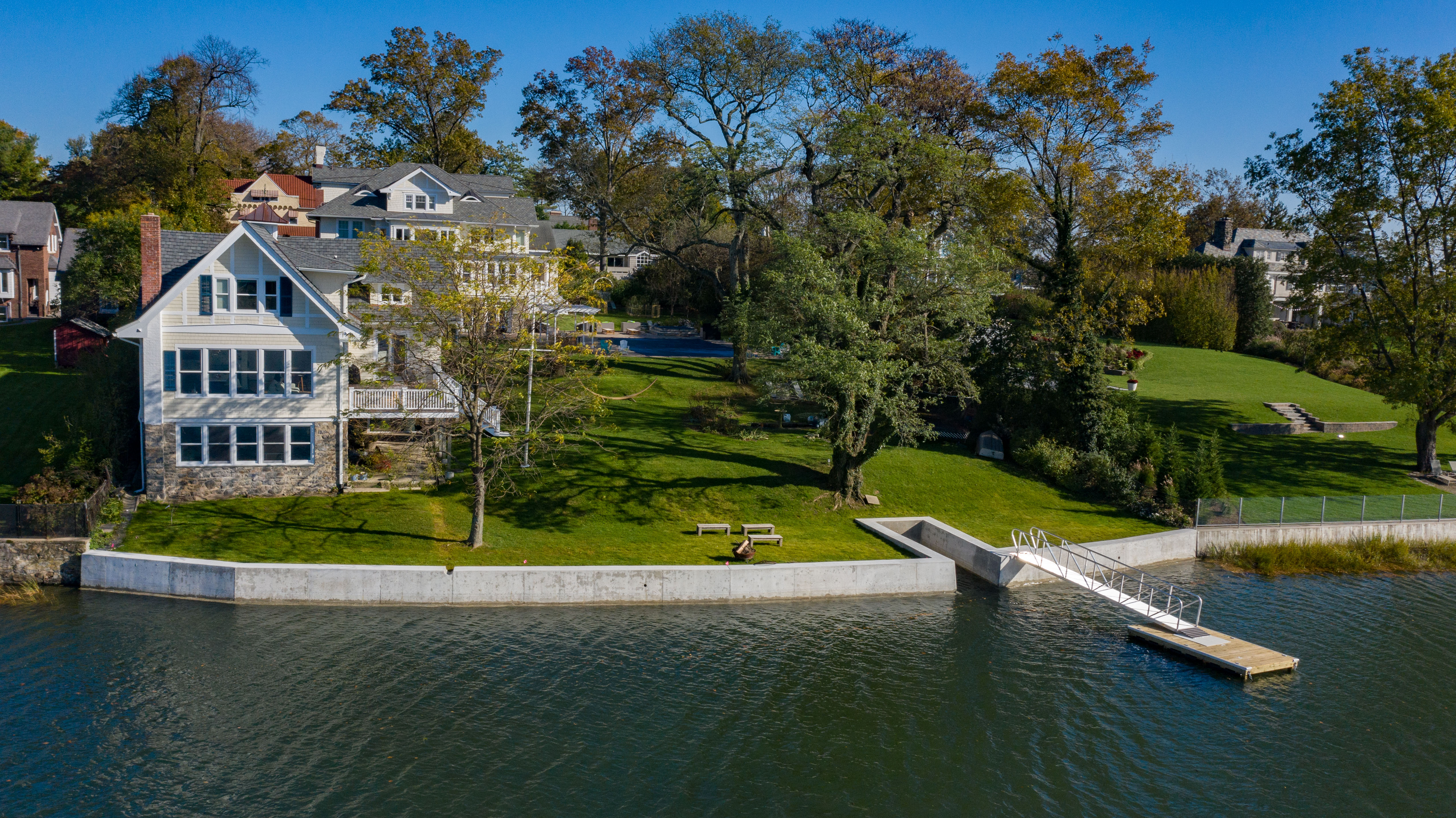 Seawalls are prime barrier protection against the erosive forces of water.
OCC has extensive knowledge and experience with the construction of long-lasting Seawall barriers for Oceanfront, Lakefront & Riverfront properties. 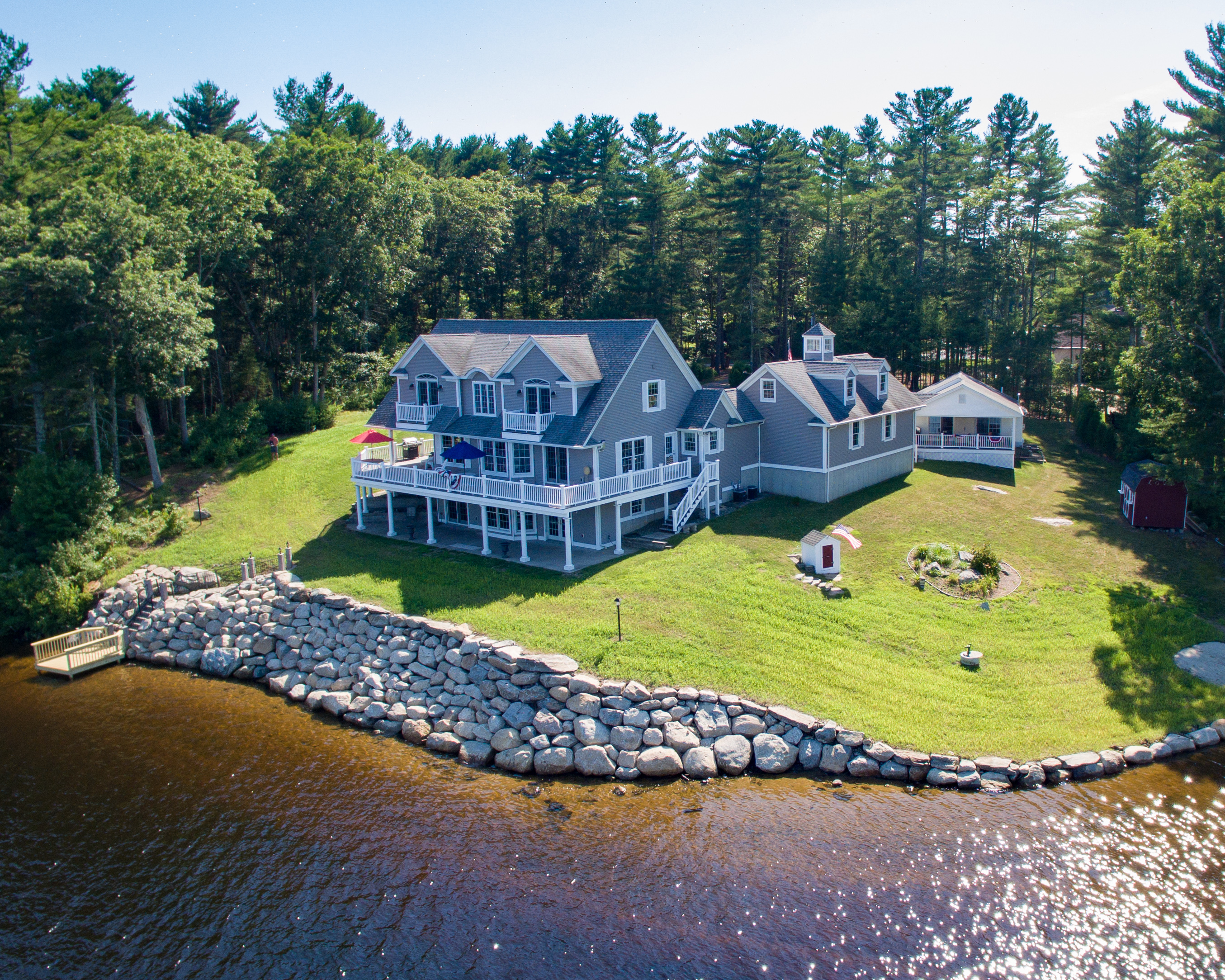 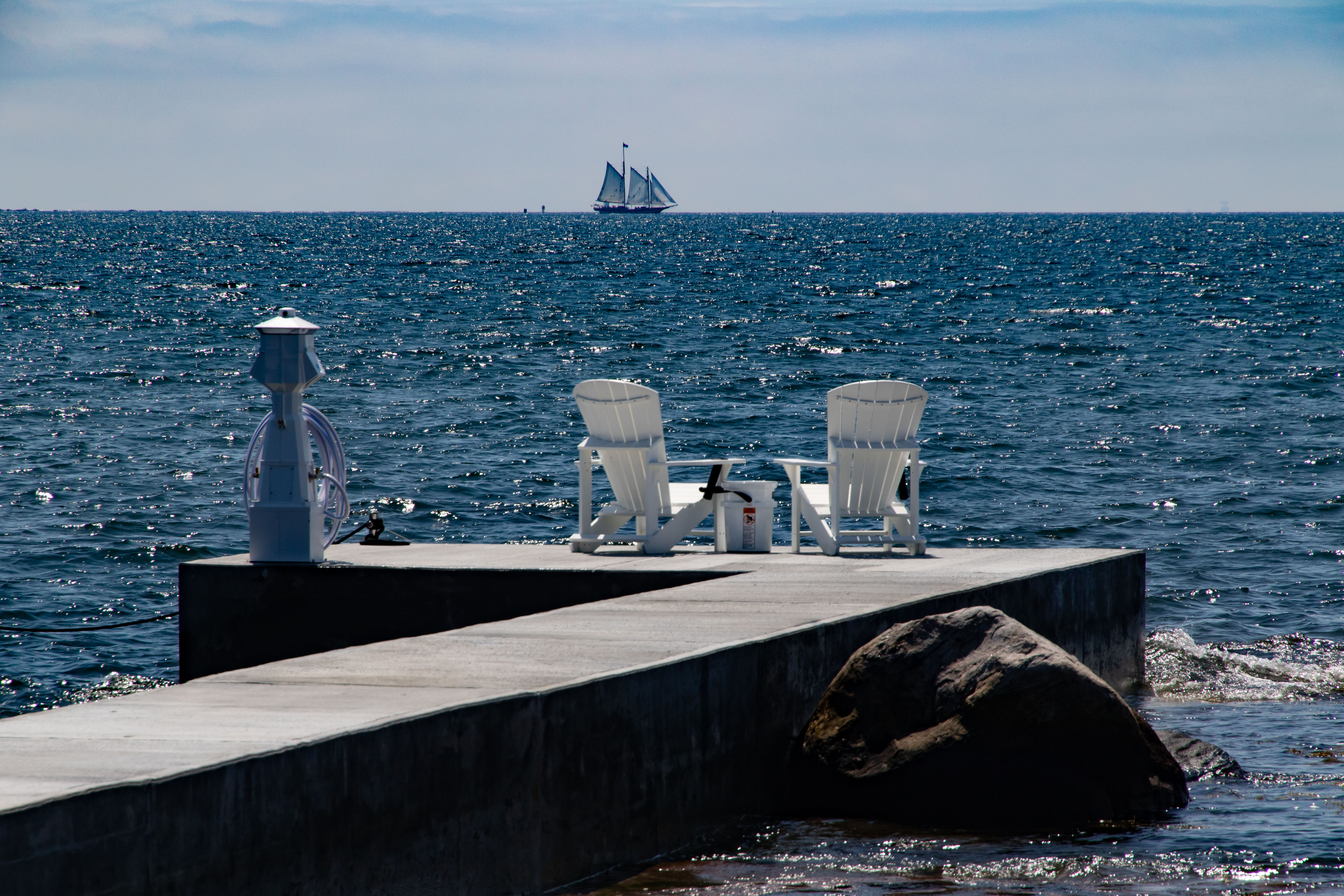 Jetties are multipurpose, serving as protective barriers, water access, and even vessel pier functions. OCC built Jetties compliment any waterfront with a reach out onto the water that provides shoreline stability. 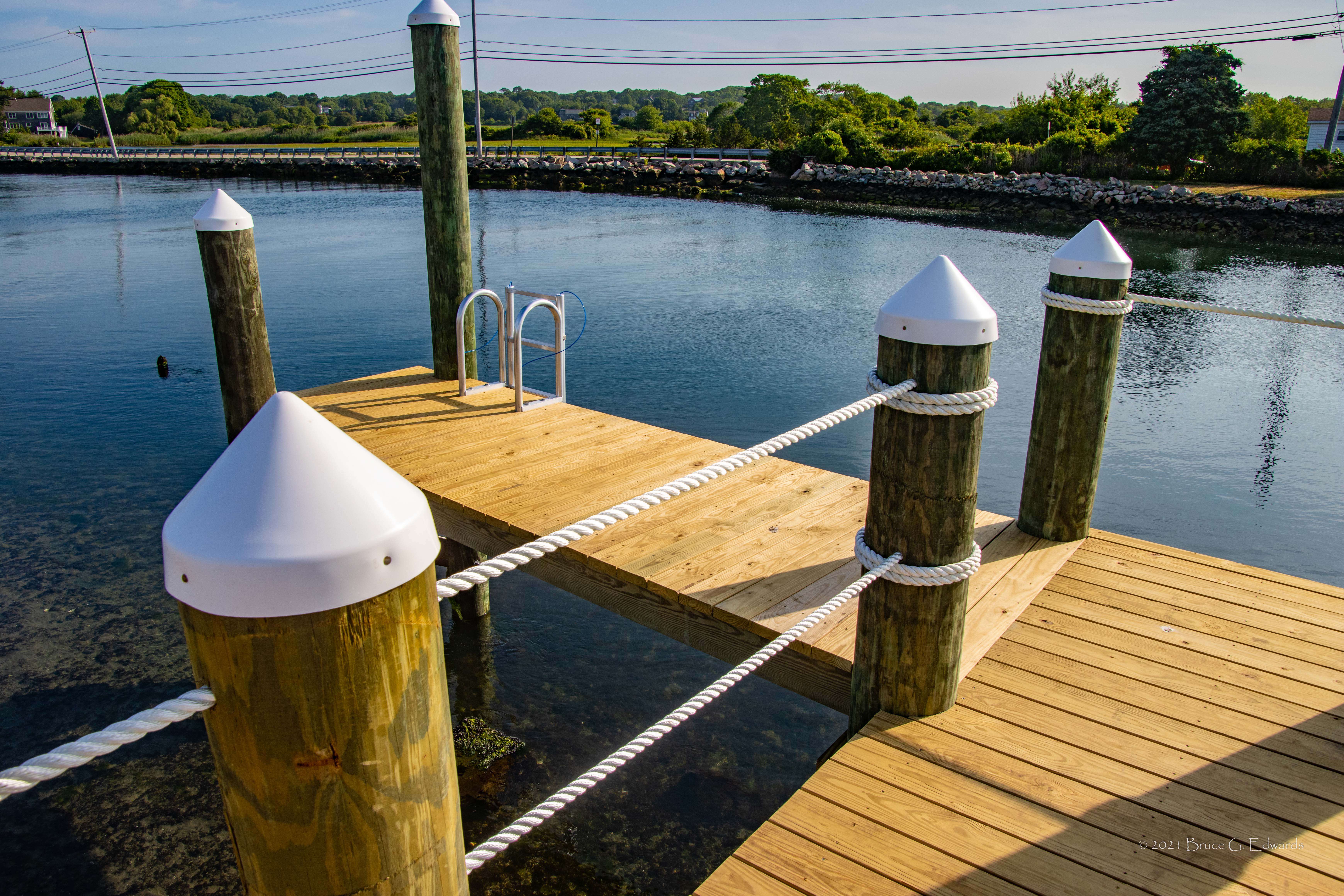 OCC expanded their operations in 2021 to include dock construction. To achieve this they purchased a barge and crane and hired two highly experienced, licensed, barge and crane operators. Seawalls & Docks, they go together best with OCC. 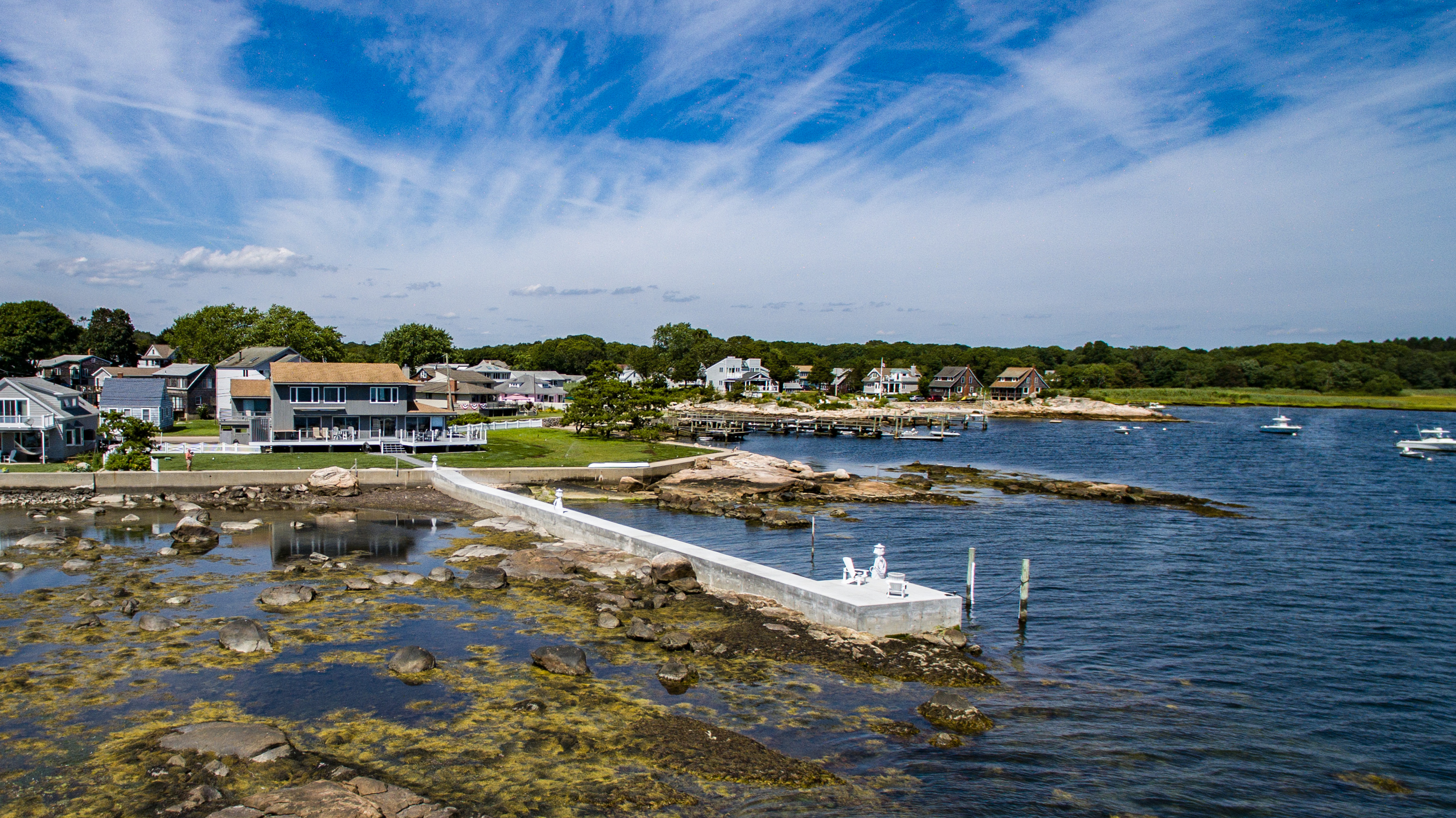 With extensive hands-on knowledge and experience as a base, an OCC design unites functionality, aesthetics and longevity into one protective barrier against erosion and damage, as well as dock and pier design and construction. 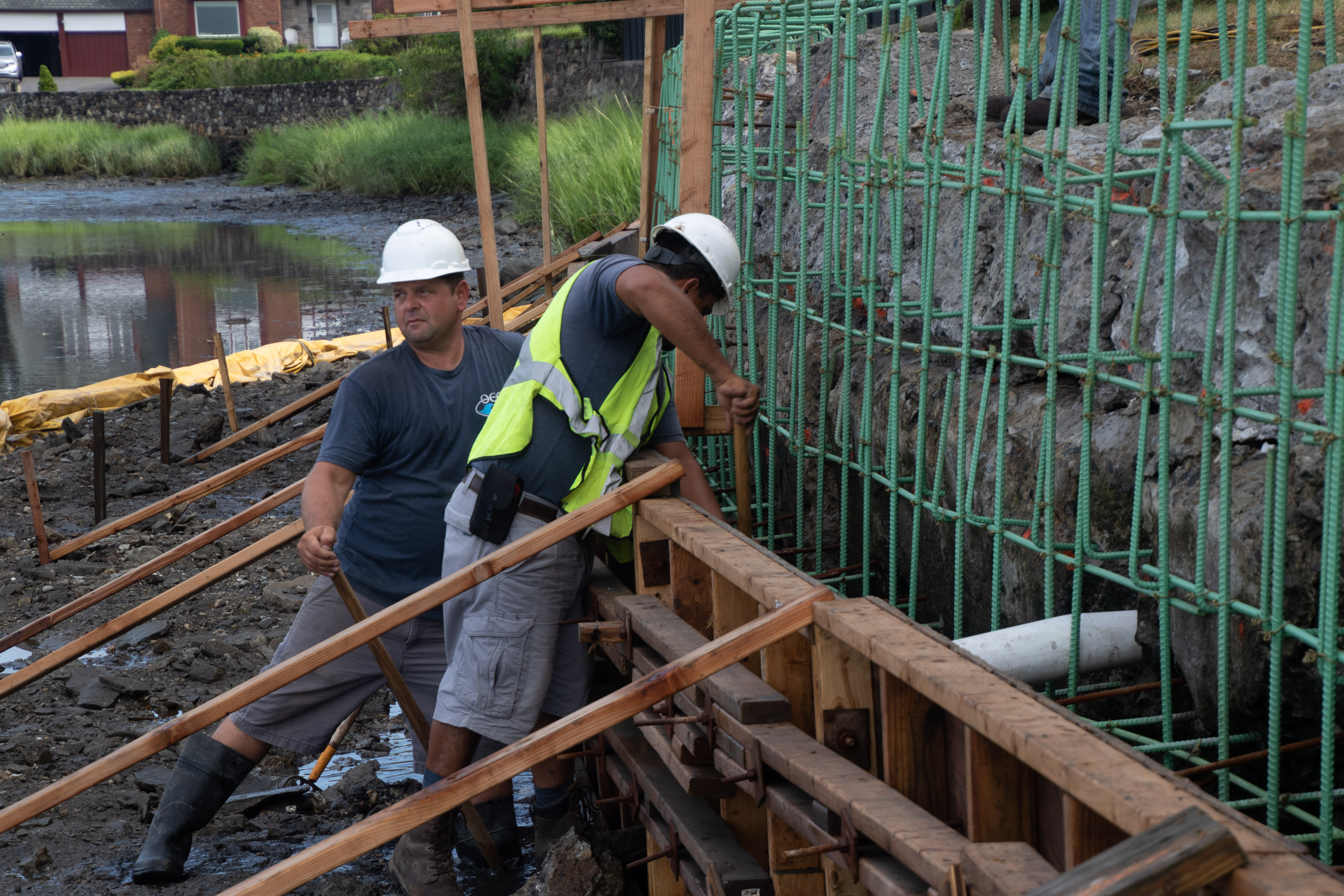 To ensure maximum quality in every build, everyone, even the company principals of OCC, are on-site, working every project. Unusual? Yes. But the reasons are sound.
The OCC hands-on build policy ensures an exceptional level of quality control, build efficiency and project management. 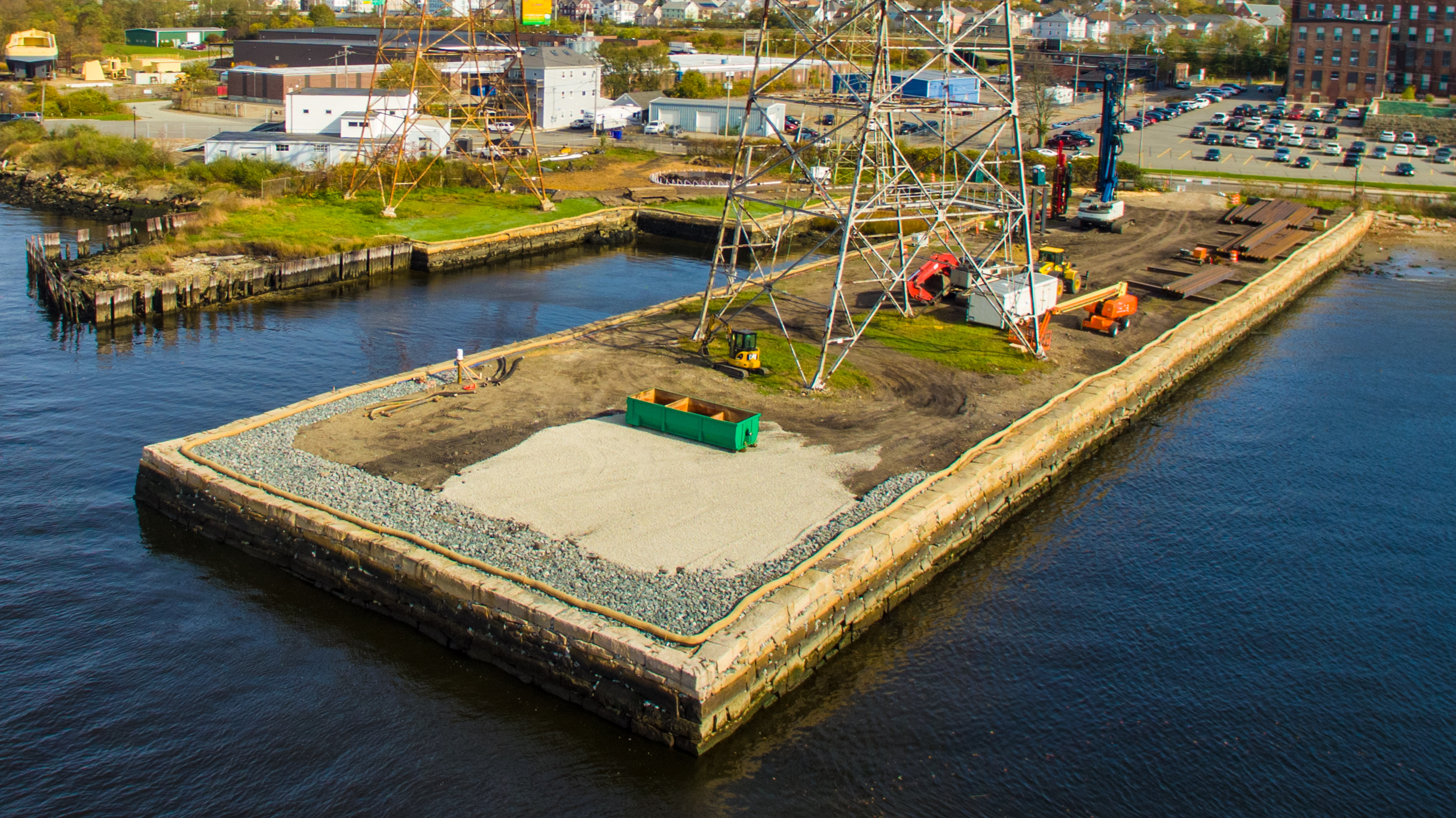 At OCC, Renovation is repair and reconstruction.  It is not a cover up job. We know what works and what won't. We build for longevity. An OCC renovated barrier has to equal new construction as much as possible. Anything less is just not on our menu.

Every Seawall is different. Each has individual criteria for proper design and build to ensure functionality, and longevity. OCC understands this and blends their experience, skillset and innovation into every project, to create an attractive, lasting barrier system that works, and works extremely well. Material selection, design and construction are critical for ultimate performance.
‍
This OCC project involved the expanded reconstruction replacement of 300+ hundred feet of ocean cove facing seawall. The new concrete wall, reinforced with epoxy coated steel rebar, included an all new footing wall, an increase in height of over 1 foot and an increase in width of nearly 2 feet. It was comprised of angular straight sections as well as a concrete boat slip that offers a future, perfect location for a boat lift. This is a relatively sheltered area that still encounters ocean driven erosion.
‍
Without direct road access due to a house, gardens, a pool, accomplishing this project was particularly challenging. Even from the water side, barge access was excluded by low bridge heights and sandbars. With virtually no disruption to the property grounds, OCC achieved the construction by utilizing one of their smaller excavators and also by pumping the concrete up and over the guest house. Getting it done is important. Getting it done right, is paramount.

When one thinks of seawalls, it is safe to say that the ocean is a key player. However, lakes, ponds, rivers and brooks are all waterways that very often require some kind of shoreline barrier protection. Erosion is a damaging and sometimes a dangerous constant at almost every inland shoreline. This home was enduring constant failures of the contoured embankment, as water would carry away the base material, initiating collapse of the yard into the lake.

OCC brought forward a functional and visually appealing resolution with a freestanding, interlocked, Stone Revetment. With OCC, it is not just a pile of rocks. The base ground is excavated and contoured for fitment of the revetment. Critical for stability and longevity, the ground area is protected with a special, very stout, erosion protective fabric and then the stones are carefully and purposely placed, one by one, to interlock with each other.

The result, a beautiful lakeside property with the OCC assurance of a top quality build of their handsome Stone Revetment. 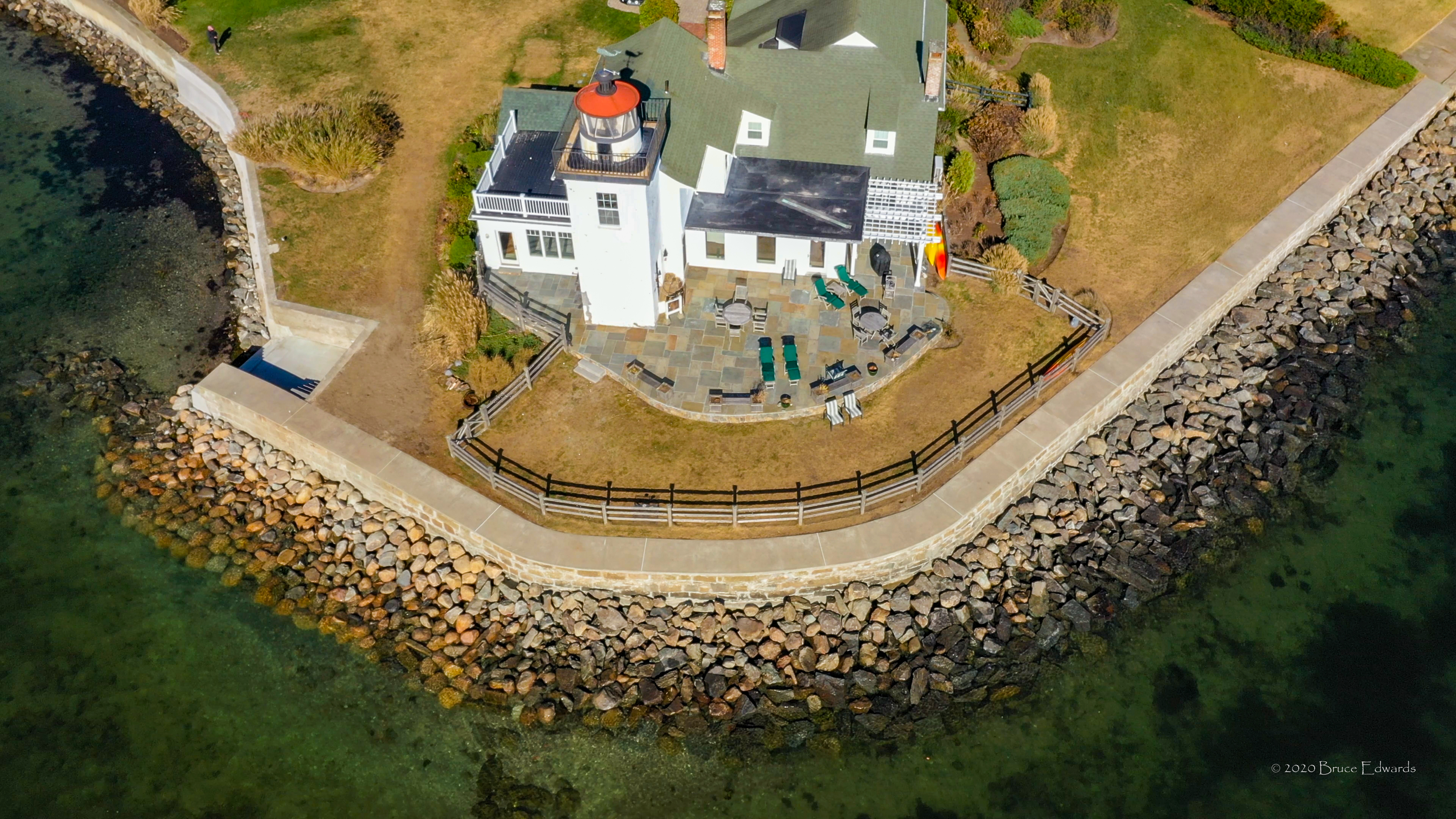 At the base of the Providence River and the top of Narragansett Bay, sits a private residence that is the Nayatt Lighthouse from the mid 1800's. Historically significant, this lighthouse originally guarded the narrow and dangerous shipping channel that twisted between underwater shoals. Ultimately, the lighthouse was retired in favor of a less accessible Conimicut Lighthouse located strategically on a shoal in the middle of the bay at the edge of the channel.

The original granite block wall is a work of art and supreme craftsmanship. The giant cut stone is stunning but, normal erosion, in its ever covert consistent attacks, along with the spectacular and powerful occasional Nor' Easter storm, had inflicted much damage and some collapse. From photographic evidence, it is possible that some of the seawall collapse damage existed from as far back as, at least, the early 1900's. A stone revetment had been added but it appeared to be just a rock dumping. Nevertheless, it was added protection that worked.
‍
Stone Revetments, in conjunction with a fixed seawall structure, can offer massive protection from erosion and storm damage. Basically, the power of damaging wave action, large or small, is diffused with the Revetment. The fixed wall provides retainment support of the the land side, capturing the soil, as well as preventing forced intrusion from the water.

To facilitate the correct repair of the seawall, OCC pulled the revetment completely away and used it as a temporary protective sea barrier. Once the lose granite blocks were reinstalled and leveling took place, a reinforced concrete foundation wall was constructed stabilizing the base of the granite block wall. Next, the entire granite seawall was repointed. Finally, more revetment stone was brought in and the revetment was completely rebuilt and expanded with an OCC preferred method of interlocking the stone for added stability and endurance. Protection, protecting history, it is the understatement of this project.

OCC started this project by stripping much of the original, existing, broken concrete slab that was jutting out into the ocean. Technically a reconstruction, the original concrete jetty directly exposed to open ocean, had suffered many, many years of  storm battering's and daily erosion. OCC wrapped the old jetty remnants with an extensive, new epoxy coated steel reinforcement cage tied to both the old concrete and the bedrock.

In the end, OCC created a robust pathway to exploration of fascinating tidal ponds and a platform for docking. Piped with with electricity and water, the illuminated docking platform is also a magical place to indulge oneself with the stunning vistas and activity of the Atlantic Ocean and Fishers Island Sound.

This is a fairly small robust dock, constructed in a high current breachway passage. The waters here are constantly moving through a narrow passage that funnels significant amounts of water in and out between a large tidal lake and the ocean. In winter, fast ice flows are common. In summer, the hydrodynamic drag against a docked vessel creates a serious pull on the dock. To avoid deflection or even collapse, one has to build the dock with the right structural design and construction of the pile set, materials, connection hardware and decking. The idea is to build function, form and fun into a visually appealing structure that will last. This is the OCC rule.
‍

A Seawall is, most often, a critical shoreline protection barrier against damage from storms and erosion. An OCC Seawall, sets a high benchmark for value in durability, function and appearance. 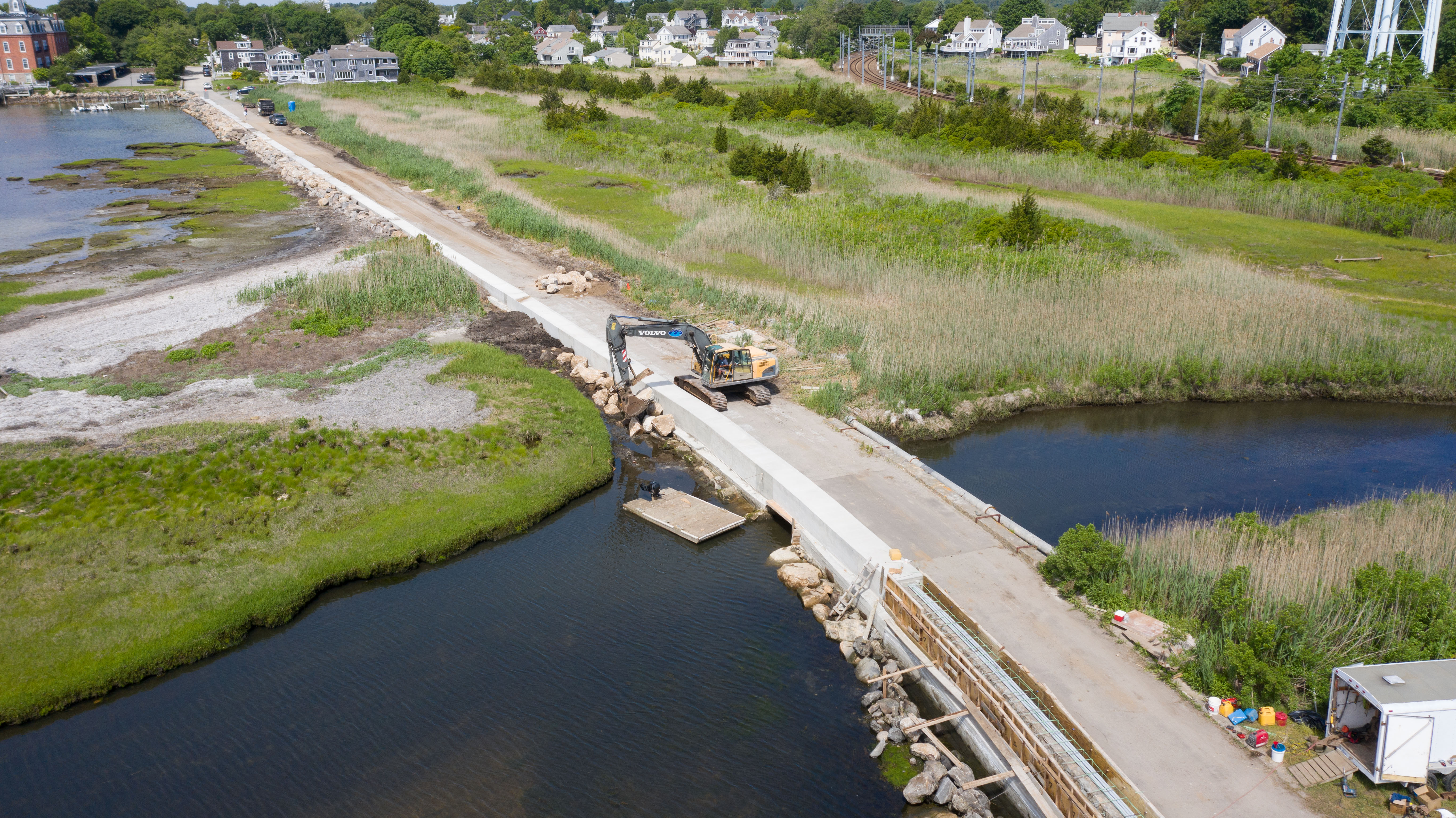 The Seawall and Stone Revetment combination is an exceptional method for sea barrier protection. The revetment effectively diffuses large and small wave action to alleviate the forces of destructive wave pounding and even every day water erosion. The seawall is a barrier component that also controls wave intrusion, erosion and flooding. The two systems work in concert to provide a highly functional, attractive, sea barrier system. 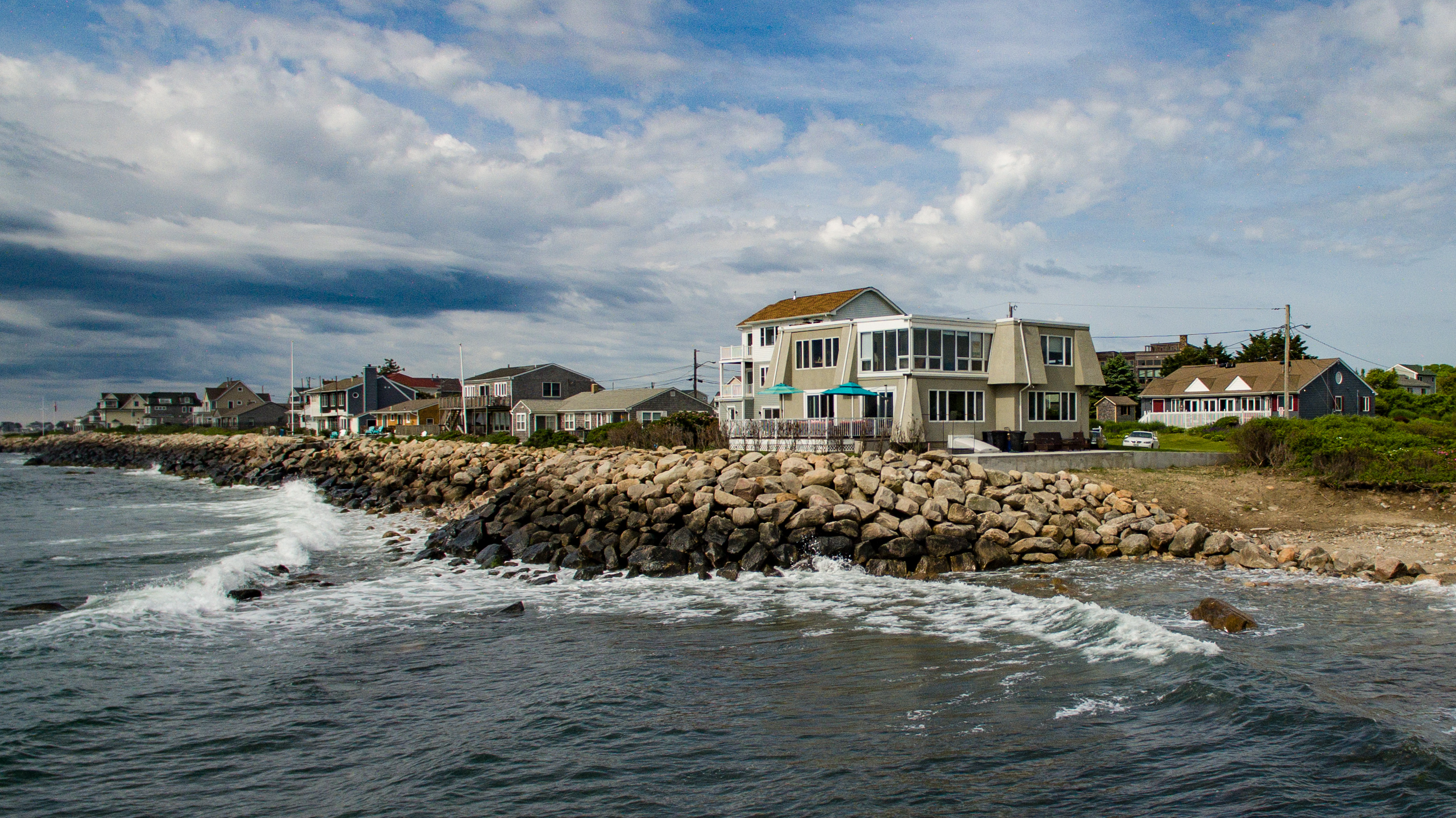 An OCC Stone Revetment is a viable, cost effective, natural looking erosion protection system. Instead of just dumping rock, OCC places each induvial stone so that an interlocking system is created with long term stability, strength, functionality and good appearance. 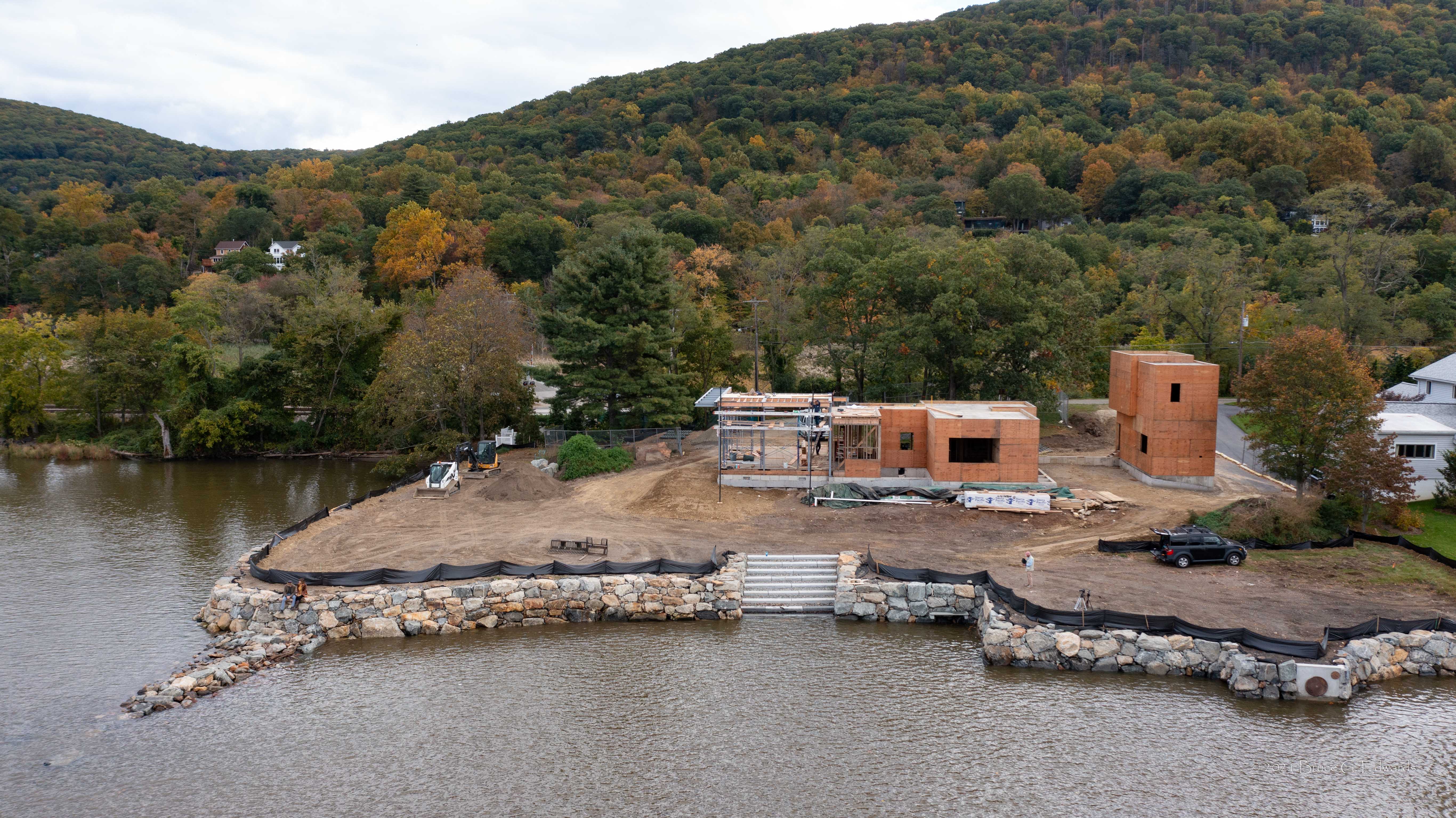 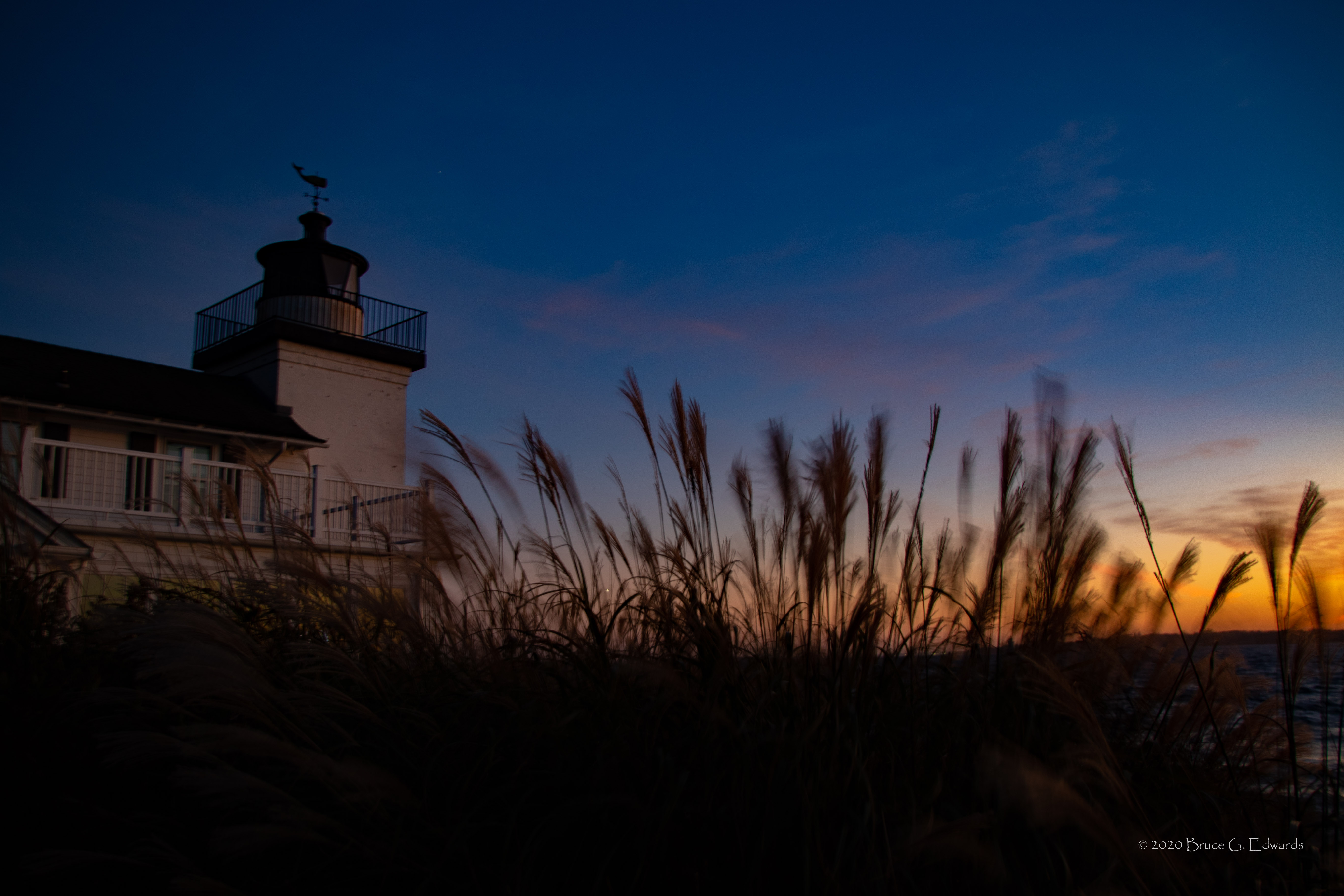 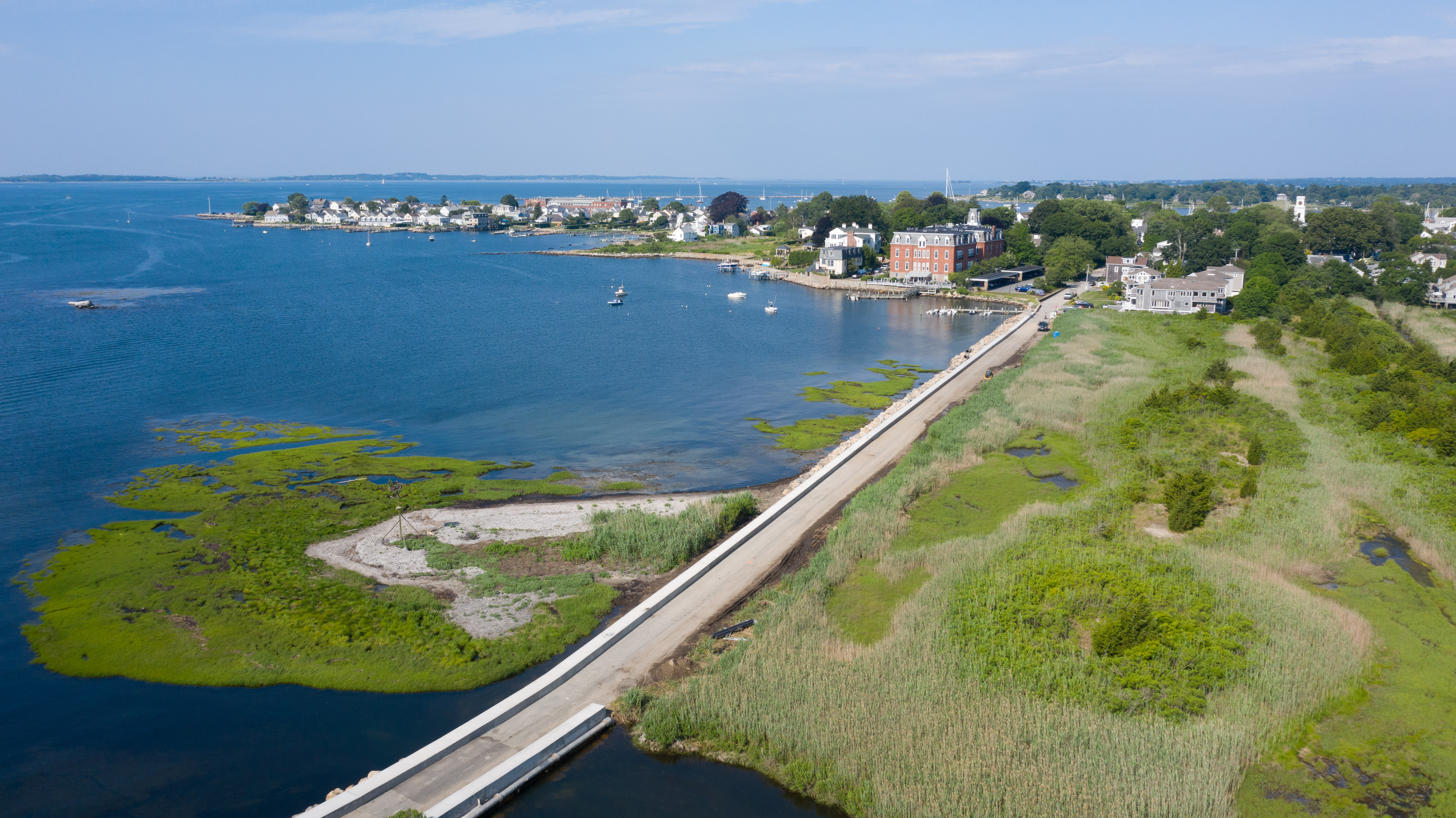 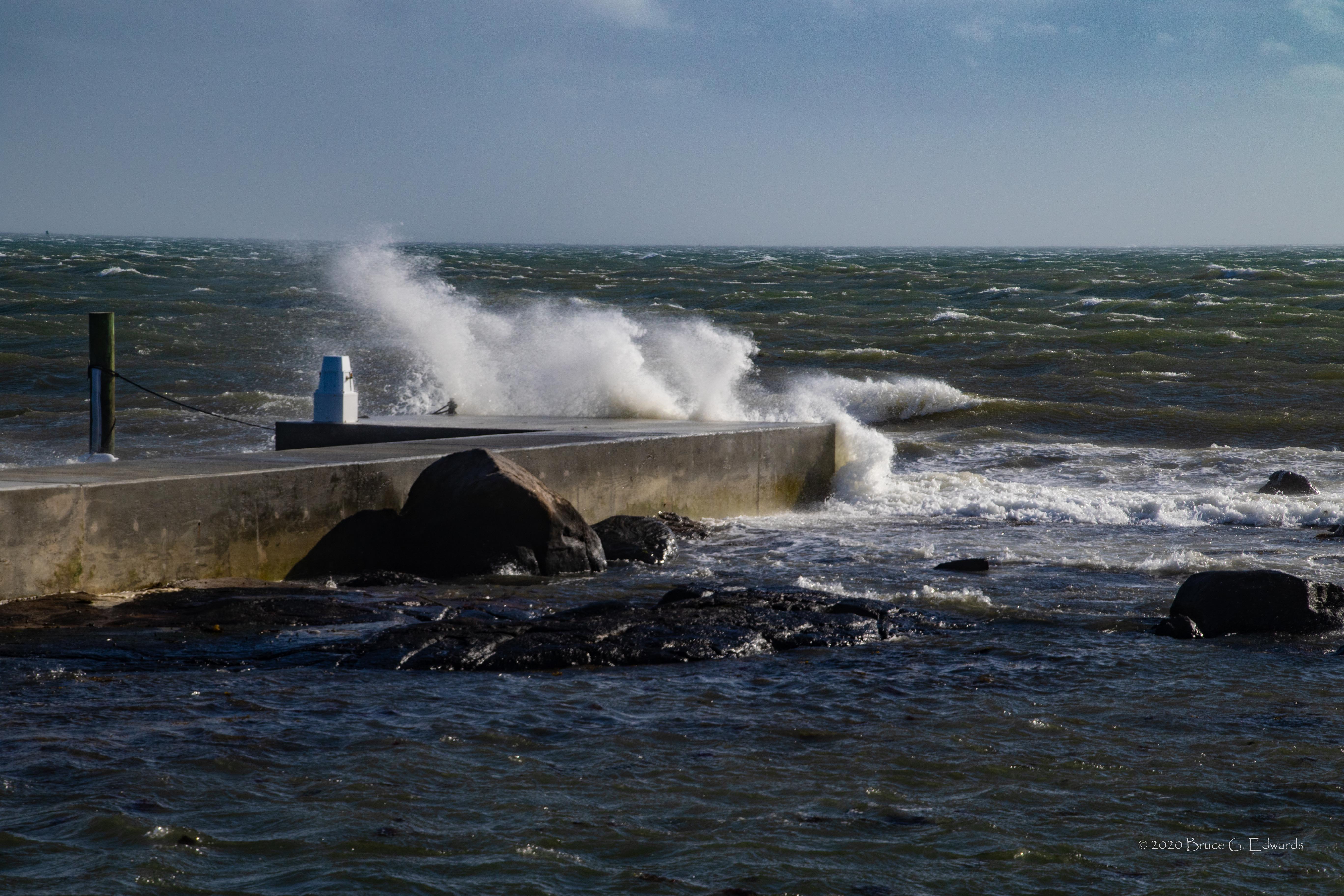